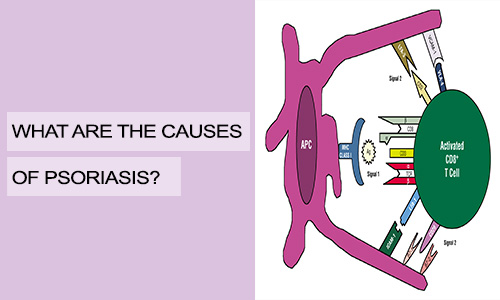 The genetic link of psoriasis has long been known, it tends to run in families. About 30% of people with one first degree relative with psoriasis has chances of developing the disease during their life time.

Just having a close relative with psoriasis does not mean that a person could definitely inherit the disease. This genetic tendency need to be triggered by some environmental, physiological or psychological factors for a person to get psoriasis.

There is no way of predicting who will develop psoriasis and who will not. 50-60% of people who have psoriasis do not know anyone in their family with the disease.

The exact cause of psoriasis remains a mystery still. As mentioned above, whether a person develops psoriasis or not may depend on a “trigger”. Possible psoriasis triggers include emotional stress, skin injury, climatic changes, systemic infections, alcohol, smoking and certain medications.

Psoriasis patients can develop lesions at the site of skin injury involving the deeper layers of the skin, especially during a period of active disease. Psoriasis worsens in areas of skin scrapes, scratches, and cuts (such as surgical wounds). That’s why it is advisable not to pick or scrub the lesions and scales of psoriasis. The development of a psoriatic lesion at the site of skin injury is known as Koebner’s phenomenon.

What Really Happens in Psoriatic Skin?

It has been suggested that a particular epidermal triggering event induces activation of the basal cell (generating cells) layer of the epidermis through activated T lymphocytes (immune cells) in the blood vessels immediately beneath the epidermis.  This results in increased turnover of epidermal cells which reach the top layer within 3-4 days instead of the normal 28 days. These are the silvery white thick scales, the typical feature of psoriasis.

In healthy skin, epidermal cells which are formed in the basal layer, are pushed up by newly formed cells from beneath. They move towards the superficial layers, gradually maturing and then getting shed from the skin surface in about 28 days. This is an ongoing process and is not very visible in normal skin (except for the dry scales seen in people with dry skin, especially in cold weather).

In people with psoriasis, due to the immunological and cellular events mentioned above, this process is accelerated to  3 to 5 days. This excessive reproduction causes skin cells to build up and form abnormal scaling seen in psoriasis. The scales seen are actually immature or premature epidermal cells, as they do not get time to mature within 3-5 days. The redness beneath is because of the dilated and tortuous capillaries in the papillary dermis, which becomes exposed due to the loosely adherent scales of psoriasis.

The analysis of population-specific human leukocyte antigen (HLA) MHC Class 1 helio types has provided evidence that susceptibility to psoriasis is linked to the class I andII major histocompatibility complex on human chromosome 6. In addition, these studies show that psoriasis consists of two distinct disease subtypes (type I and type II), which differ in age of onset and in the frequency of HLA. In type I (early-onset) psoriasis, Cw6, B57, and DR7 are strongly increased, whereas in type II (late-onset) psoriasis, HLA-Cw2 is over represented.

Keep in mind that there are also more than 50-60% cases that do not have any family history of psoriasis.

This means that genetic factors alone do not cause or induce psoriasis. To put in simpler words, you do not inherit psoriasis, but inherit a tendency to get the disease!

Significant evidence is accumulating that psoriasis is an autoimmune disease.

Lesions of psoriasis are associated with increased activity of T cells in underlying skin. The focus of research has gradually shifted from the keratinocyte to activated immunocytes as the prime cellular culprits in psoriasis. The precise mechanism by which activated T cells trigger psoriasis is unknown, but it may involve release of cytokines that influence the extra cellular matrix and the receptors on the surface of epidermal keratinocytes.

Over the past decade, the view of the pathogenesis of psoriasis has dramatically changed. Previously it was assumed that keratinocyte hyper proliferation associated with abnormal epidermal differentiation was the primary cause of psoriasis. However, it is now recognised that epidermal hyperplasia is a reaction to the activation of the immune system in focal skin regions, which, in turn, is mediated by CD8+ and CD4+ T lymphocytes that accumulate in diseased skin.Indeed, psoriasis is now recognised as the most prevalent T-cell–mediated inflammatory disease in humans.

Now let us examine the Triggers of Psoriasis

The information given in this article is for educational purpose only so that patients are aware of the options available for diagnosis and treatment of common skin, hair and nail diseases. No diagnosis should be made or treatment undertaken without first consulting your dermatologist. If you do so, the author will not be responsible for any consequences. The images provided are for illustration purpose only and should not be reproduced without the consent of the author.

About the Author of Skin Care Tips from Dermatologist: Dr Hanish Babu, MD

Dr Hanish Babu, MD is a dermatologist with more than 3 decades of experience in treating skin and sexually transmitted diseases in UAE and India. He has been practicing in UAE since last 22 years. He is a respected speaker during the Continuing Medical education Programmes for doctors, medical students and paramedical staff and is also a Stress Management Trainer. He organises group therapy sessions for patients with psoriasis, eczema and vitiligo.