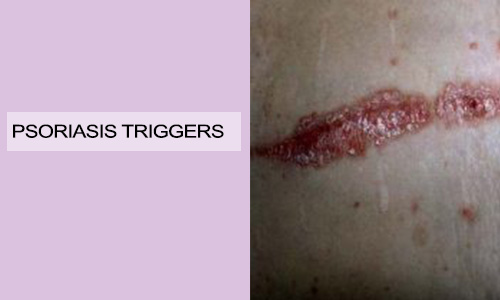 We have already seen the basic causes of psoriasis. Certain factors in the day to day life of individuals with a genetic predisposition may trigger an attack of psoriatic rashes in the body.

The triggering event in psoriasis may be unknown in most cases but is likely an immunologic event caused by any of the allergens described below.

Commonly, the first lesion appears after an upper respiratory infection, such as streptococcal pharyngitis, especially in guttate psoriasis.

Perceived stress can cause exacerbation of psoriasis. Some authors suggest that psoriasis is a stress-related disease and offer findings of increased concentrations of neurotransmitters in psoriatic plaques.

Guttate psoriasis has been recognised to appear following certain immunologically active events, such as streptococcal pharyngitis, cessation of steroid therapy, and use of antimalarial drugs.

Also of significance is that 2.5% of those with HIV develop psoriasis during the course of the disease, implicating immune factors in the causation of psoriasis.

Stress as a Trigger of Psoriasis

Psoriasis is more stress sensitive than many other skin diseases. Many stressful events of daily life may exacerbate psoriasis. The disease itself may cause a ‘reactive depression’ in the patient which could further exacerbate his psoriasis. A vicious cycle is thus set up.

A number of studies have shown that psychological stress is often caused by psoriasis, and can be a factor in psoriasis flare ups.

The way in which stress, depression and anxiety influence the course of psoriasis is not known. Some studies suggest that the influence may be through an effect on the immune system. Stress has far reaching effects not only on the immune system, but the neuro-endocrinological systems as well.

Local Skin Injury as a Trigger of Psoriasis

Koebner phenomenon, also known as isomorphic response, refers to the induction of lesions following local trauma or injury to the skin.

Superficial trauma to the epidermis alone will not induce the new lesions, injury to the upper part of dermis (papillary dermis) is necessary for the Koebner’s to occur. Insult to the skin may be of any kind, for e.g.physical (cuts), chemical(burns), mechanical (rubbing),allergic(contact dermatitis) etc.

There have been many case reports of Koebner phenomenon developing at sites of surgical wounds, sunburn, chickenpox scars, vaccination ulcers and other skin eruptions.

It usually occurs within 7 to 14 days of injury to the dermis, the interval may vary from 3 days to 3 weeks. Koebner phenomenon has also been reported at sites of bites(insects, animals), drug reactions, herpes zoster, skin tests also.

About 10% of psoriasis patients develop a new psoriatic lesion each time the skin is injured. The likelihood of developing the Koebner phenomenon may increase when psoriasis lesions are already present.

Infections as a Trigger of Psoriasis

Studies show that some infections can trigger psoriasis. It is common for people with a family history of psoriasis get strep throat and develop their first psoriasis lesions two weeks later. Strep throat often precedes an outbreak of guttate psoriasis. Inverse psoriasis is frequently aggravated by a thrush infection.

Common infections that can trigger psoriasis are:

Treating the infection in many cases lessens or clears the psoriasis.

Medications as a Trigger of Psoriasis

Many drugs are known either to precipitate or to exacerbate psoriasis. Rather than being simple drug reactions, these observations throw some light on the aetio-pathogenesis of psoriasis.

A number of beta-adrenoreceptor blocking drugs – propranolol, practolol, metaprolol and oxyprenolol- used to treat hypertension and heart disease have been reported to induce a papulo-squamous eruption that resemble psoriasis.

The cyclic AMP(cAMP) level in psoriatic epidermis is decreased and this decrease may induce accelerated turn over of epidermal cells. Beta blockers further reduce cAMP levels and thereby exacerbate psoriasis. The lesions produced by these drugs are less scaly and less erythematous. The palms, soles and elbows are only rarely involved, and the eruption usually subsides within 2 to 6 weeks of cessation of beta-blocker therapy.

Non-steroidal anti-inflammatory drugs, indomethacin, salicylates, diclofenamate, phenylbutazone, oxyphenbutazone and ibuprofen have been reported to either precipitate or exacerbate psoriasis.

Treatmentof depression with lithium compounds in psoriasis patients can destabilize and exacerbate the psoriasis.

Lithium compounds have an inhibitory effect on adenyl cyclase and reduce hormone induced accumulation of cAMP in vitro. This may be the mechanism of exacerbation of psoriasis in these patients.

Trazodone, another new anti depressive drug which is a serotonin antagonist, can also cause generalized pustular psoriasis. This suggests that an alternate mechanism may also be involved.

Too rapid a withdrawal of corticosteroid therapy in patients with psoriasis may result in precipitation of generalised pustular psoriasis or may cause exfoliative erythroderma as a rebound phenomenon. Occasionally, topical corticosteroids, especially the more potent ones, also cause such exacerbations.

Chloroquine is another drug that has been known to exacerbate psoriasis, often leading to exfoliative erythroderma, although its exact mechanism in causing such an exacerbation is not fully understood.

Climate as a Trigger of Psoriasis

Farber and Nell found that 89% of patients in their study experienced worsening of their psoriasis during winter.

High humidity is beneficial, so is gradual tanning sunlight. Harsh sunlight, though, may worsen psoriasis by inducing the Koebner phenomenon through sunburns. Zlotogorski observed that many male patients who drove cars had less involvement of the left elbow than the right one because the left arm was exposed to sunlight through the window.

Winter tends to be the most challenging season for people living with psoriasis. Numerous studies indicate cold weather is a common trigger for many people and that hot and sunny climates appear to clear the skin.

Cold winter weather is dry, and makes the skin drier. This usually worsens psoriasis. Psoriasis can become even more severe when the stress of the holidays and winter illnesses combine to compromise immune systems.

While hot and sunny weather may help clear psoriasis, air-conditioning can dry out the skin and aggravate psoriasis. Regular moisturising and a little humidification of  the interiors can help prevent this.

Smoking as a Trigger of Psoriasis

Several studies confirm that psoriasis is associated with smoking. Nicotine alters a wide range of immunological functions, including innate and adaptive immune responses.

Quitting smoking improves psoriasis for some; however, quitting does not always clear the psoriasis. More research is needed in this area.

Studies support the hypothesis that nicotine alters the immune response by directly interacting with T cells and dendritic cells as well as indirectly through brain-immune interactions. Additionally, nicotinic cholinergic receptors have been demonstrated on keratinocytes that stimulate calcium influx and accelerate cell differentiation; they can also control keratinocyte adhesion and upward migration in the epidermis. This suggests a biologic explanation for the association between smoking and psoriasis.

Alcohol as a Trigger of Psoriasis

It is now believed that heavy drinking may trigger psoriasis in some people. Heavy drinking also may make treatment less effective. Again, more research is needed.

The finding with respect to alcoholism may at first seem anomalous, because the aetiology of alcoholism has long been described more in terms of behavioural, socioeconomic, and environmental factors.

However, genetic factors have been implicated in the development of alcoholism, and other studies have similarly described an association between increased alcohol consumption and psoriasis.

One study conducted in the United States reported that patients with psoriasis had a daily alcohol consumption rate averaging of two to three times the national average. Other studies have suggested that alcohol may act as a triggering event and may also adversely affect response to treatment in psoriasis patients.

Diet as a Trigger of Psoriasis

Many claims have been made on the role of diet in triggering or worsening psoriasis. Many scam sites advocate fad diets that are ‘guaranteed’ to ‘cure’ psoriasis. To create pseudo-credibility, they also post many testimonials from patients who have been cured (Just read through those testimonials: most often they all have same style, indicating the same author!)

Well, here is the fact: Current scientific research does not confirm that eating a certain food or taking a specific supplement could make psoriasis better or worse. Though some studies support that psoriasis seems to improve with omega 3 fatty acid containing fish oils, evening primrose oil etc, others have found no appreciable benefits.

Red meats, which contain arachidonic acid, may exacerbate psoriasis and is best avoided. Arachidonic acid is known to induce inflammation.

Do not ever be under the impression that anything ‘natural’ or ‘herbal’ is harmless! They can have unknown side effects, which could sometimes be dangerous, just like any other medication. The side effects are unknown because they have not undergone the vigorous clinical and laboratory investigations that the modern medicine undergoes.

Hence it is important to inform your dermatologist what kind of supplement or herbal remedy you are taking and how much you are consuming.

Hormones as a Trigger of Psoriasis

Science has not uncovered all psoriasis triggers. Hormones also appear to trigger psoriasis in some people.

How hormones affect psoriasis is still not well understood. Research shows that many people develop their first psoriatic lesions just after puberty when hormone levels fall. When hormones levels increase during pregnancy, psoriasis improves for many women. A recent study showed that 55% of pregnant women with psoriasis reported an improvement, 21% saw no change, and 23% experienced worsening. After delivery, only 9% reported improvement and 65% saw their psoriasis worsen. More research is needed to understand these effects.

Because psoriasis appears to be a multifactorial disease, some epidemiological surveys have been conducted to determine disease associations in psoriasis as a means of better understanding the pathogenesis of the disease.

In most studies, obesity, diabetes mellitus, heart failure, and hypertension were found significantly more frequently in patients with psoriasis, as was chronic tonsillitis.

Several cutaneous disorders including atopic dermatitis, eczema herpeticum, urticaria, impetigo contagiosa, and allergic contact dermatitis were significantly under represented in patients with psoriasis. The diminished frequency of infectious diseases in patients with psoriasis together with a significantly reduced rate of T-cell-dependent disorders such as contact allergy and atopic dermatitis supports the concept that psoriasis is an immuno dysregulatory process.

To sum up, psoriasis is a multifactorial disease with a genetic predisposition, triggered by many lifestyle factors, setting in motion an immune cascade of events resulting in a hyper proliferative disease in the skin and joints.

The information given in this article is for educational purpose only so that patients are aware of the options available for diagnosis and treatment of common skin, hair and nail diseases. No diagnosis should be made or treatment undertaken without first consulting your dermatologist. If you do so, the author will not be responsible for any consequences. The images provided are for illustration purpose only and should not be reproduced without the consent of the author.

About the Author of Skin Care Tips from Dermatologist: Dr Hanish Babu, MD

Dr Hanish Babu, MD is a dermatologist with more than 3 decades of experience in treating skin and sexually transmitted diseases in UAE and India. He has been practicing in UAE since last 22 years. He is a respected speaker during the Continuing Medical education Programmes for doctors, medical students and paramedical staff and is also a Stress Management Trainer. He organises group therapy sessions for patients with psoriasis, eczema and vitiligo.