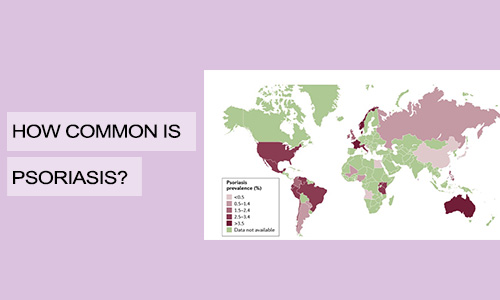 Genetic and environmental factors greatly influence the clinical development of psoriasis. This results in wide differences in the prevalence of this disease among different ethnic groups and in different parts of the world.

Patients with minimal clinical manifestations often do not  seek medical attention. In many third world countries, poverty, illiteracy, ignorance, and , in case of females, modesty may be preventing patients from approaching health care providers for diagnosis and management of the disease.Hence psoriasis may be much more prevalent than the studies indicate.

Most studies on prevalence are based on information from clinical examinations, interviews, census studies and mailed questionnaires.

Thus, estimates of the occurrence of psoriasis in different parts of the world vary from 0.1 to 3%.

Around 125 million people worldwide (up to 3% of the population) have psoriasis.

23% of people – that’s28 million – with psoriasis go on to develop psoriatic arthritis, a potentially debilitating type of joint disease, a complication of psoriasis.

Its prevalence in a hospital population was about 6% to 8.7% in two studies

In the United States, between 2 and 2.6% of the population is affected with psoriasis. That works around to approximately 7.5 million persons with psoriasis. Between 150,000 and 260,000 new cases of psoriasis are reported annually.

Four hundred people die annually from psoriasis-related causes in the US.

Psoriasis is more common in whites. The incidence of psoriasis is much lower in dark-skinned West Africans andAfrican-Americans than in light-skinned people of European ancestry. Incidence is also low in Japanese and Eskimos, and is extremely low to non-existent in Native Americans in both North and South America.

There have also been case reports of psoriasis appearing in infants within weeks of birth and in patients above the age of 70 years, but these are more of exceptions rather than the norm.

Approximately 10-15% of new cases begin in children younger than 10 years. Children tend to have more of the guttate variety of psoriasis than the plaque psoriasis compared to adults.The median age at onset is 28 years.

Females tend to develop psoriasis slightly earlier than males and those with a family history have an early age of onset.

Psoriasis occurs with almost equal frequency in males and females. Many studies have found higher prevalence among males while others vouch for a higher female prevalence. As the difference between the genders are not very prominent, we will settle for the equal frequency.

There may be another reason for the disparity in sex prevalence studies.

As females are more concerned about the condition of  skin and nails and are more aesthetically inclined than their counterparts, they must be approaching doctors more often with milder varieties of psoriasis.