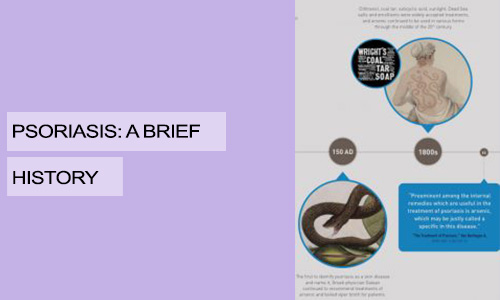 Psoriasis is probably one of the longest known illnesses of humans and also one of the most misunderstood one. It was confused with leprosy till the 19th century.

The biblical term ‘lepra’ was actually applied to various cutaneous disorders including psoriasis, vitiligo, eczema, boils and alopecia areata. Some believe that  ‘tzaraat’ mentioned in the Bible represents psoriasis.

Hippocrates (460 – 377 BC) did describe a skin condition akin to psoriasis.

There are mentions in the literature about the term “psoriasis” as being  used by Aristophanes of Byzantium at the end of the third century B.C. But Aristophanes’ description  of the disease does not, however, correspond to our clinical picture of psoriasis.

Some historians, however, believe that  it was the Roman physician Galen who used the term “psoriasis vulgaris” for the first time, though not particularly for the exact entity .

The name psoriasis is derived from the Greek word psora which means to itch. In fact, before Hebra (see below) the term ‘psoriasis’ was used for many skin diseases where itching was a prominent feature.

In the first century, the Roman Sage Cornelius Celsus described a condition similar to psoriasis and classified it as the fourth variant of impetigo.

JosephJacob Plenck (Vienna, 1776) wrote of a condition similar to psoriasis as being amongst the group of desquamative (scaly or scale like) diseases. He did not dig deeper to differentiate it from other dermatological conditions.

Psoriasis was known as Willan’s lepra in the late 18th century after the English dermatologist, Robert Willan (1757 – 1812) recognised the disease as an independent entity. He identified two categories. Leprosa Graecorum was the term he used to describe the condition when the skin had scales. Psora Leprosa described the condition when it became eruptive.

Finally, it was in 1841 Ferdinand Hebra, a Viennese dermatologist improved on Willan’s notes and assigned the name  ‘Psoriasis’ to the disease for the first time in the long history of the disease.  It was Hebra who described the clinical picture of psoriasis as we recognise it today. The hereditary factor of psoriasis was already known by that time.