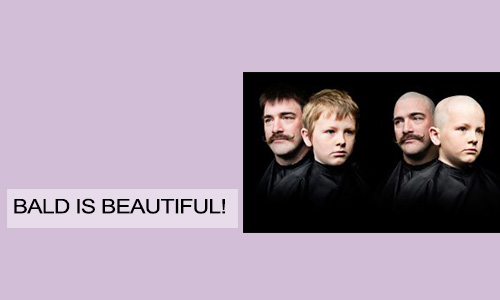 At the outset let me point out that this bit is not written to discourage those who have embarked on the enterprising trichological quests in pursuit of the hairy mirage. This is a fact : by no stretch of imagination can one consider Male Pattern Baldness a disease, though it does cause some dis-ease in the feeble minded! At the most it can be branded a cosmetically distressing ‘problem’.

An article in praise of the chrome dome by Prof. Raja Babu of Hyderabad, one of the doyens of dermatology in India, set me browsing the net and literature to get to the root of the scant hair scenario. And this search did prove to be quite fascinating.

Here was one web site by a group of merry ladies, a fan club of THE BALD:

Quote: What was it we liked about bald men? The sense of strength, confidence, intelligence, a well-seasoned maturity combined with a well-reasoned sense of self confidence. The way they simply radiate passion and masculinity. Did you know that there is a concept that some men are so brilliant and fiery that their overwhelming passion burns out the roots of their hair? Sigh.

……Meanwhile, all of us knew at least one sterling young man who was fretting over his hairline, and here we were trying to tell them DON’T DO IT! Agh! Toupees! Implants! Rogaine! Yuck! You might think it covers it up, but a woman always knows. Just be yourself, and be proud! Anybody who razzes you about it is either excessively immature, or just doesn’t have any idea what they are talking about. Baldness is sexy. Mrrrrowww! Unquote.

There is no historical record of how long baldness has been blessing men. A reasonable guess is that our cave dwelling ancestors were never bald, but were endowed with bearish overgrowth all over to protect them from the rough exteriors. Richard Harrison and William Montagna predicted long ago in their book ‘Man’ that men of future generations shall be even balder, ultimately a time will come when each and every single hair root will vanish into the oblivion of evolution. To put in a nut shell, the bald men are far ahead in the evolution tree than their contemporary hairy cousins. Wow! Something to be proud of, isn’t it?

Aristotle (BC 384-322 BC) associated baldness with “libidinous males” and Hippocrates (460-377 BC) observed that ‘eunuchs do not take Gout nor become bald’. A 1983 study revealed that bald men have high concentrations of testosterone in their saliva compared to their hairy counterparts. Lots of other studies also point towards a greater aggression, a greater virility or a greater reproductive ability in the Bald Machos!

Economically also the bald stands to gain. No hair cut expense, no oil, no combs. And heavy savings on grooming time and money!

Still a lot of deluded bald heads world over spend millions every year in vain search of the hairy mirage. Since time immemorial the obsession to regrow the lost vanity had bordered on pathological obsessions for the magical cure.

Look at this ancient Egyptian remedy for the baldness: Spread a mixture (on the bald head) of the fat of a lion, a hippo, a deer, a crocodile, a goose and a serpent. Hunting must have been a part of the medical curriculum in those days! Another ‘simpler’ remedy simply consists of equal parts of writing ink and cerebrospinal fluid.

Minoxidil and Fenestride compete with hundreds of alternate herbal cousins which promise miraculous cures for the distressed and the deluded. Many people who fall victims to the high profile, and most of the time unethical, advertisement gimmicks get temporary and scanty relief after years of scrubbing and rubbing.. By the time they realize the futility of the exercise they are poorer by thousands of dollars. Herman Melville in Moby-Dick (1851) puts it rather bluntly: “In truth, (if) a mature man who uses hair-oil, (then) that man has probably got a quoggy spot in him somewhere. As a general rule, he can’t amount to much in his totality!”. What can you say to that?

Back to the sowing days, transplanting hair roots was a fashion for a brief period, which lost its charms in the aftermath of huge chunks of gaping holes in the purse coupled with equally unbearable and prolonged pains that the courageous had to endure.

Concealment was taught to the humanity by none other than Julius Caesar the First who used to comb forward in a brave attempt to conceal his bald pate. We definitely know he was unsuccessful in his attempts as his apical activities have been carefully noted by his historians and passed on for the posterity as a’ piece de coupe’! With the eminently stylish wreath becoming an object de fashion , ancient Romans were also the forerunners of the multibillion dollar wig business; though the emperors kept the laurel wreath for themselves for many centuries. and denied their citizens the ‘pleasure’ of concealment. 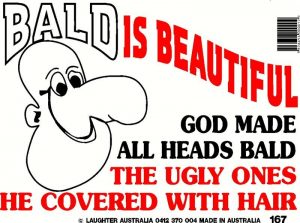 William Shakespeare, himself a respectable bald, was quick to recognize that baldness and wit go together. The Bard noted in ” The Comedy Of Errors”: “…and what he (God, that is) scanted men in hair he hath given them in wit..”.

We have many contemporary “greats” who adorn the Hall of Fame with natural and aided chrome pates: Yul Brunner, Persis Kambatta, Sinead O’Connor and not to forget Andre Agassi and Michael Jordan, the list is long and reads like a Who is Who in the world of the famous.Explore the ‘heady’ properties of the powerful leaders of the Nations , and , have no doubt, the Bald will shine far ahead than the hairy ones.

Forget the story of Samson and Delilah. What kind of wimp loses all his strength at the mere snip of his hair? Real men do their talking with chrome domes. Want proof? Just look at the world of professional wrestling, where the hottest and brightest superstars have smooth skin and don’t wear rugs to cover it up!

Ambrose Bierce in his The Devil’s Dictionary (1911), defines RESPECTABILITY as ‘The offspring of a liaison between a bald head and a bank account’. No doubt about it, yes, the bald scalp symbolizes Wealth and Wisdom. Cool!

“Skin is in,” claims John Capps, president and founder of the Bald Headed Men of America, with more than 20,000 gleaming members. “The few, the proud, the bald,” he says. The membership of BHMA is open to all “Bald-headed men who agree with the philosophy ‘Bald is beautiful’.

BHMA is dedicated to the belief that bald-headed men (whether chrome-dome, balding pate, or bald spot) have extra individual character. It strives to cultivate a sense of pride in all bald-headed men and to eliminate the loss of self-esteem associated with loss of hair and promotes National Rub a Bald Head Week.

During the week and the annual conference held in the second weekend of September, the Founder gives speeches and makes television appearances proclaiming ‘the fun of being bald.’ The organization also maintains speakers’ bureau and charitable programs; compiles statistics and operates a Hall of Fame.”

At last year’s annual convention of the Bald Headed Men of America in Morehead City, N.C., women were the judges in deciding the best “overall appearance” of a bald head. “First they caress and feel the shape of a head,” says Capps, “then they look at it from a distance to see the twinkle in the eye, and the twinkle in the smile. All this blends together and becomes as pretty as a full moon.”
Last year’s winner was a gregarious Leo Lane, an Australian Priest who celebrated his smooth victory by offering a blessing for every bald head at the convention.
Bald as the bare mountain tops are bald, with a baldness full of grandeur (Matthew Arnold ,1888), my Bald Brothers out there, what have we lost but our hair? The Creator could create only this many perfect heads, the rest he had to camouflage with hair! This is the age of the Vanishing Hair…. Be Proud! Be Happy! And go out there and SHINE! 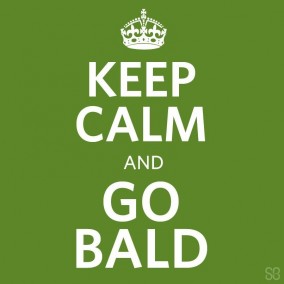 4 Replies to “Bald is Beautiful!”